At the recent PhysioUK conference, #150Leaders alumni Emma Coleman said that a Physio career looks less like an arrow and more like spaghetti (I paraphrase).

I could argue that I have already had a spaghetti route getting to Physio, before I even started. I was a Chiropractor for ten years before deciding that I needed to move on. I enjoyed the education aspect of my patient interaction and decided to move into teaching. After working in a friend’s restaurant as a chef in the interim, I entered my school-based training and completed my PGCE. It turned out that a one-on-one interaction with a person was nothing like corralling twenty-five teenagers and convincing them that they want to learn science, and after eight months, I decided that teaching was not for me. I sat down with my wife, we discussed the options, and I decided that physiotherapy would fulfil all I was after from a career. After a late application, I was lucky and excited to be accepted by Bournemouth University.

Being the oldest in my year, I knew I had some experience and a desire to help my peers get the most out of their time at university. So, I put myself forward as a student representative, but I certainly didn’t see myself as a leader. It was in this role that my academic advisor suggested I apply to the #150Leaders programme. I applied, more in hope than expectation, and wasn’t accepted. I was disappointed but, not really feeling like a leader, this reinforced my knowledge that I really wasn’t a leader.

One of my achievements in my first year was to conceive and put together a team to organise and deliver a conference aimed at AHPs from the universities close to BU. This was a successful day. The best feedback, for me, was from one of the delegates who told me she wrote a 2000-word reflection about the talks. Staff members who came along commented upon how good the day had been, and that we should do it again.  But I really didn’t see this as an example of leadership.

However, one of the things that came out of the process was that I used “I”, instead of “we”, when talking about the organisation of the day. I tried to analyse what was driving this habit, and realised that it was a lack of self-confidence that was driving me to take credit for what was a collaborative effort. Perhaps I was a bad leader?

It was around this time that the #150Leaders programme came around again. I decided not to apply. I didn’t want to get rejected again, and I still wasn’t a leader.

Then I saw a video interview with Jurgen Klopp, the Liverpool manager, which changed my view of leadership. I realised I was still seeing leadership as a lead from the front, having all the answers, being an inspirational sort of figure. Klopp discussed that leadership isn’t about being first in and last out, and it isn’t about having all the answers.  It’s about listening to people and helping them to be the best that they want to be, which, in turn, automatically improves the whole group and system. This resonated much more with my journey to this point.  I firmly see education as the main driver for self-betterment. I love learning. I love listening to people and finding out about them. Perhaps I was a leader after all, I just needed to get better.

So in a rush, two days before the deadline, I applied to the Student Leadership Programme again. With no time to prepare, I was more open and honest with my answers. Luckily enough, this got me onto the course.

It’s not easy to be an introvert in an extrovert’s world. It takes a lot of energy to be around people and I am generally quiet in a group situation. This was reinforced by my Meyer-Briggs personality test, which suggested I was an “Introverted Defender”. I don’t like change, but I will do everything I can to make other people happy. All this meant walking into a room full of strangers on the 10 March and it filled me with trepidation. There was so much to find out about people. Why were they there? What did they do which made them stand out? 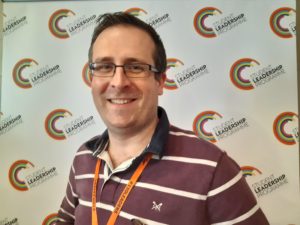 The speakers really worked to make you feel that you belonged. Dr Katerina Kolyva spoke about leadership styles and the evolution of a leader. The alumni that spoke were all from different backgrounds and were different characters. Stacy Johnson MBE discussed the characteristics of junior leadership, which helped me realise that asking “why not?” was a strength. Professor Nigel Harrison gave a fascinating insight into his leadership journey and encouraged us to find additional skills that complement our path. Joanne Bosanquet MBE showed that you need to be brave. Seize opportunities that arise, even if you don’t think you’re the right person for the job.

What I took away from the two days was that it was okay for me to be the type of leader I want to be. This won’t be the radical thinker or the lead-from-the-front follow-me type. This is the leader I want to be: “if your actions inspire others to dream more, learn more, do more, become more, you are a leader”. I know there is still a long way to go. I need to work on my confidence, self-belief and learn to work with my imposter syndrome, but I now know the “I” will become “we”.

Thank you to all at the Council of Deans of Health and the Burdett Trust for Nursing that have enabled this to happen.